RODOLFO COMERIO AND TEKNI-PLEX GALLAZZI: THE WINNING PAIR GETS STRONGER

A NEW CHALLENGE, A NEW SUCCESS: the close collaboration between the two top lombardy-based companies, leaders in the plastics sector, continues, leading to the creation of a new high-performance calendering line with a major impact on the production capacity of the company in gallarate.

It was on March 21st 2020, in the midst of a pandemic emergency that had pushed Italy into its first lockdown, when TEKNI-PLEX GALLAZZI was put into serious difficulty by a fire that accidentally broke out on one of the three calendering lines at the company’s headquarter in Gallarate and then rapidly spread in the entire production site.

GALLAZZI, a historic Italian company founded in 1973 and acquired in 2015 by the TEKNIPLEX Group, is specialised and globally dedicated to the production of PVC sheet and film for pharmaceutical applications (blisters), manufactured in its Tradate plant, and films for adhesive tapes, manufactured in its Gallarate plant.

The Lombard company, determined not to lose its leadership in the niche market in which it has been operating for years with the production of the Gallarate plant, has immediately faced the emergency by relying on a partner of absolute reliability, RODOLFO COMERIO Srl, a Lombard company founded in 1878 which boasts a very long history and undisputed experience in the design and manufacturing of calendering plants for the production of PVC and rubber films that continue to be the pride of the major world producers.

The recovery and total revamping of one of the three calendering lines involved in the fire began immediately, and in record time, on July 23rd 2020, a fully reconditioned line, upgraded with the latest innovative technologies of the lombard manufacturer, left the RODOLFO COMERIO premises in Solbiate Olona, to reach the TEKNI-PLEX GALLAZZI production site in Gallarate, which was also completely renovated.

That was the first step towards a rebirth that has now seen, just over 12 months after the restart of the first line, the start-up of the second calendering line of even greater dimensions, totally designed and manufactured from scratch by RODOLFO COMERIO, equipped with all the most innovative and high-performance solutions developed by the company in its ongoing R&D activity.

A goal that seemed unthinkable in such a short period of time and with all the difficulties that many Italian companies had to deal with during this period, but which was successfully achieved thanks to the strong motivation and close cooperation that the two companies, led by two prominent figures from the Lombardy business community, created to get quickly the production back on track at TEKNI-PLEX GALLAZZI.

RODOLFO COMERIO is led by Carlo Comerio, company’s Managing Director, known internationally as “Mr. Calender” due to his many years of experience and knowledge of the world of plastics and rubber calendering and his ability to always find innovative solutions in this sector.

TEKNI-PLEX GALLAZZI is led by Antonino Crisafulli, company’s Managing Director and General Manager, whose international experience makes him a determined leader, capable of achieving all the objectives set.

A combination and excellent teamwork that has enabled TEKNIPLEX-GALLAZZI, with the commissioning of this second line, to achieve unthinkable levels of productivity in record time in a very complicated background (COVID and shortage).

RODOLFO COMERIO is a world leader in the design and manufacturing of calendering plants for the Plastics and Rubber sectors (and not only).

QUALITY, INNOVATION AND TECHNOLOGY are the cornerstones of the company, which has been active for almost 150 years and has always been led by the Comerio family, heirs of Rodolfo Comerio.

The company aims to strengthen the brand through the addition of new professional figures, a new technical/commercial organization for customer support, the renewal of its headquarters and the continuous registration of important patents to protect the technological innovation of its product portfolio.

TEKNIPLEX-GALLAZZI, is a world leader in the production of PVC sheet and film for pharmaceutical applications (blisters) and films for adhesive tapes. Part of the US TEKNI-PLEX Group, it boasts two highly efficient and high-performance production sites in Italy with a total production capacity of 50,000 tonnes/year of PVC film, which is exported to 53 countries worldwide. In the two plants countless calendering lines are in operation, all supplied by the reliable Rodolfo Comerio company, as well as coating, laminating and cutting lines specialised in serving the market for PVC-E adhesive tape, in the pharmaceutical field with rigid PVC-S and PVDC coated film for high barrier properties.

IN THE PICTURE: on the left Carlo Comerio (Managing Director of RODOLFO COMERIO S.r.L.) 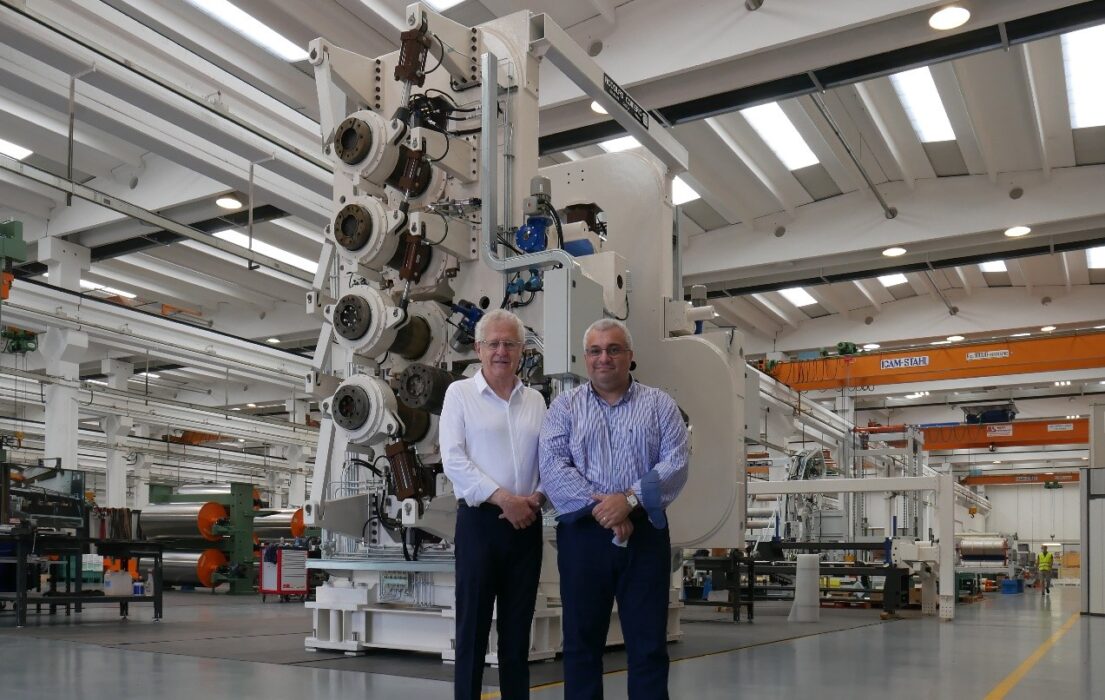